Patriotic Pulaski County has a long and proud tradition of patriotism. Another symbol of our patriotic pride was unveiled Monday, November 11, 2013 at Missouri Veterans Cemetery- Fort Leonard Wood. The Pulaski County Korean Association dedicated their gift, the Korean War Memorial monument to gathered onlookers and dignified guests in a ceremony that started at 9:00 a.m.. 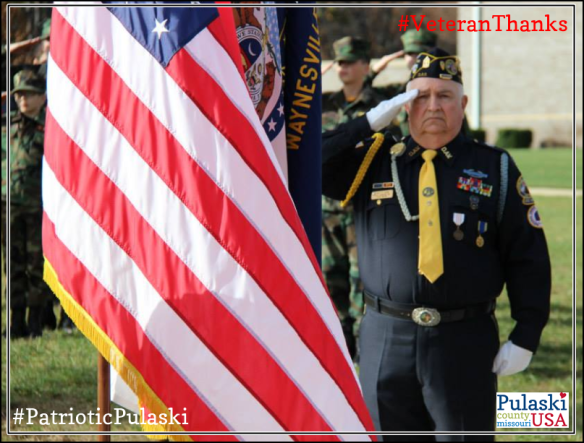 A member of Harry L. Herron Disabled American Veterans Chapter 49 salutes the American flag during the National Anthem of the United States of America.

The monument is a tribute to the 358 soldiers from 62 counties surrounding Pulaski County that gave their lives during the Korean War.

1SG (Ret) Walter B. Dixon speaks about his experience as a POW during the Korean War. Mr. Dixon also recited some of his poetry.

Mrs. Kyong Rainbolt, President of Pulaski County Korean Association spoke of her appreciation for those who served in the Korean War.

After the unveiling and acceptance of the monument Mr. Lee expressed appreciation for all those who served in the Korean War and Mrs. Rainbolt described the war as “America’s forgotten victory”. Both Mr. Lee and Mrs. Rainbolt reminded those in attendance that “Freedom is Not Free”. 60th Anniversary coins were presented to the Korean War Veterans in attendance by Mr. Lee.

Governor Jeremiah W. (Jay) Nixon issued a proclamation that was read by Charles Baxter. The proclamation recognizes that “trade and economic development, tourism and educational and cultural exchanges advance our peoples and peoples around the world and promote peace” and also commended the Consulate General of the Republic of Korea in Chicago “for honoring Korean War veterans and their families and friends”.

Pulaski County Tourism Bureau is proud to include this newest monument, a gift from the Pulaski County Korean Association as a stop on our Veterans Memorial Tour. This self guided driving tour directs visitors and tourists to nine tributes to our veterans that are in Pulaski County, Missouri. For your complimentary brochure call 877-858-8687 today. 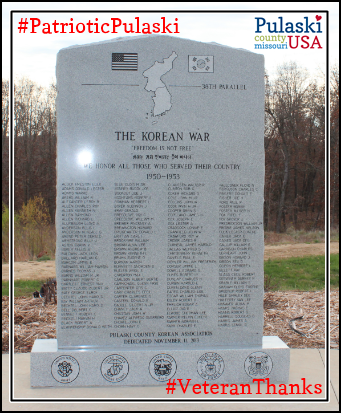