The following was published in the Sacramento Daily Union newspaper July 24, 1857.

RIVAL TO THE MAMMOTH CAVE OF KENTUCKY.

-We have been furnished the following description of a large cave, in Maries county, by M. Meyer Friede, of St. Louis, who explored it on the Thursday, the 14th ult. The cave is known by the name of the Big Saltpeter Cave:

The cave is in Maries County, 1 3/4 miles from the Gasconade River, on a creek called Cave Spring Creek, in township 38, section 21, range 9, west. He went to the cave, guided by Mr. R.H. Prewett, a young man, about 25 years old, who was born and raised about a quarter of a mile from the place.

In front of the entrance was a small stone house, which the old settlers thought was built by the Indians, but is now in ruins.

The entrance goes straight in the rock on a level with the surrounding surface rock, is about one hundred feet wide, and, in the center, about twenty-five feet high, arched. Messrs. Friede and Prewett entered the cave for near four hundred feet, where it narrows to about twenty-five feet wide and fifteen feet high, and presents the appearance of an ante-chamber; from there they passed into a large chamber, about one hundred feet in height, where three galleries branch off; they then passed into the left gallery, which ascends near twenty feet on a bed of saltpeter. This gallery is called the Dry Gallery, and is about five hundred feet in length; the height varies from one hundred to about thirty feet. The ceiling and sides are composed of solid rock. Near the end is a large round chamber which Mr. Prewett calls the ball-room, and that gentleman states that his father had given balls in the chamber frequently; the last was in the winter of 1850, at which time there were about eighteen or twenty persons there. They went in the morning and stopped all day, and arrived at home in the evening, cooking and eating their meals in their subterranean saloon, and had a merry time of it. 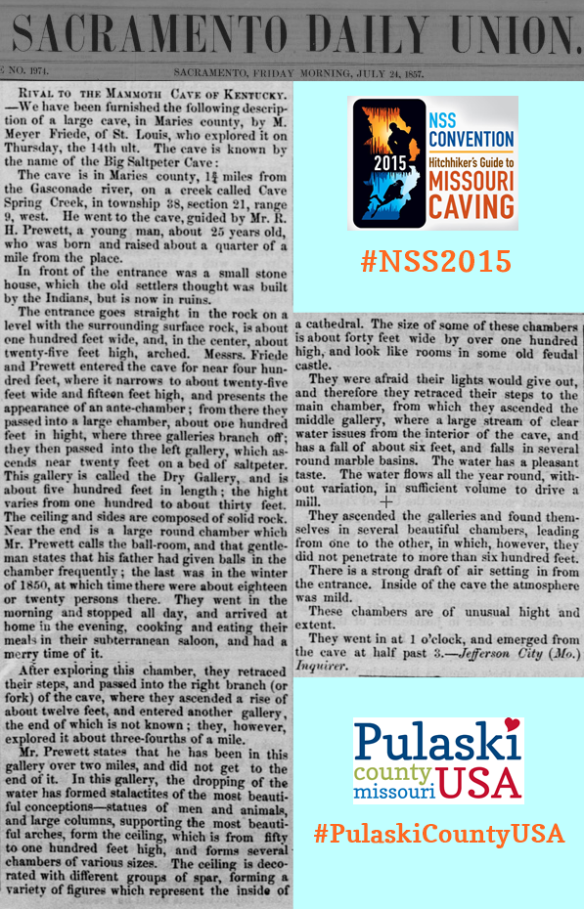 This article about Big Saltpeter Cave in Maries County, Missouri, was published in the Sacramento Daily Union Friday morning, July 24, 1857. The 2015 National Speleological Society Convention will be held July 13- 17, 2015 in neighboring Pulaski County. Waynesville, the host location, and county seat of Pulaski, is the heart of Missouri’s cave country.

After exploring this chamber, they retraced their steps and passed into the right branch (or fork) of the cave, where they ascended a rise of about twelve feet, and entered another gallery, the end of which is not known; they, however, explored it about three-fourths of a mile.

Mr. Prewett states that he has been in this gallery over two miles, and did not get to the end of it. In this gallery, the dropping of the water has formed stalactites of the most beautiful conceptions- statues of men and animals, and large columns, supporting the most beautiful arches, form the ceiling, which is from fifty to one hundred feet high, and forms several chambers of various sizes. The ceiling is decorated with different groups of spar, forming a variety of figures which represent the inside of a cathedral. The size of some of these chambers is about forty feet wide by over one hundred high, and looks like rooms in some feudal castle.

They were afraid their lights would give out, and therefore they retraced their steps to the main chamber, from which they ascended the middle gallery, where a large stream of clear water issues from the interior of the cave, and has a fall of about six feet, and falls in several round marble basins. The water has a pleasant taste. The water flows all he year round, without variation, in sufficient volume to drive a mill.

They ascended the galleries and found themselves in several beautiful chambers , leading from one to the other, in which, however, they did not penetrate to more than six hundred feet.

There is a strong draft of air setting in from the entrance. Inside of the cave the atmosphere was mild.

These chambers are of unusual height and extent.

They went in at 1 o’clock, and emerged from the cave at half past 3. —Jefferson City (Mo.) Inquirer

The 2015 National Speleological Society Convention will be held July 13- 17, 2015 in Pulaski County, Missouri. Waynesville, the host location, and county seat of Pulaski, is the heart of Missouri’s cave country.