On behalf the Carroll Cave Conservancy, I’d like to encourage one and all to come to this year’s convention in beautiful Pulaski County, Missouri. We look forward to making new friends and reconnecting with some old ones. In the February issue of NSS News, it was announced that Carroll Cave is the “crown jewel” of the convention. We couldn’t agree more and are eager to share this jewel with as many convention attendees as possible. In the guidebook, we’ll delve deeper into the rich history of the cave and current exploration efforts. For now, we’d like to make a brief introduction to CCC and the role we’ll play at convention.

Who we are: CCC is the brain child of Rick Hines (37511RE) who has several contributions to NSS News under his belt. Rick first explored Carroll in 1970, assisting pioneering cave photographer Andy Kramer and others on trips in the cave. It was not until the early 1990s that Rick was able to pursue his dream of exploring and photographing this incredible cave. But by that time, relations between the owners of the natural entrance and the caving community had gone sour and the entrance was off limits. Not to be deterred, Rick studied maps and introduced himself to area landowners, eventually securing a sinkhole on grazing land that looked to be a promising place to dig into the cave. Upon recruiting others who had a passion for Carroll, digging began in 1995 with the expectation of a new entrance in short order. But, as Rick puts it, “it was not to be. Due to safety concerns, the sinkhole dig was reluctantly abandoned after five years and over 1000 man-days of digging. A new approach was needed. In the interim, the conservancy was chartered. A vertical shaft through the solid rock was blasted during a nine month period beginning November 2000. Carroll had a new entrance. Carroll cavers had new life!

Over the ensuing years, CCC maintains an active membership roster of about 80 people, making us one of the larger caving groups in the state. We are not a Grotto, but draw members from Grottoes in Missouri and surrounding states. CCC does not own any land above the cave, but leases a one acre plot where we’ve dug our entrance. Membership is required to access Carroll through this entrance. During convention, we’ll waive membership requirements, but will ask all who enter to sign the landowner waiver (and we certainly won’t discourage anyone from joining). Our main mission is to manage and maintain this entrance, stay in the good graces of our landowner and secure the orderly exploration of this cave which has proven to be so elusive. In addition to the ongoing survey work, CCC conducts regular biology inventories, hydrology monitoring, restoration projects, photography trips and trips for landowners’ families and friends to enhance their appreciation of their natural resources. We’ve also conducted joint cave rescue training with local fire district personnel. 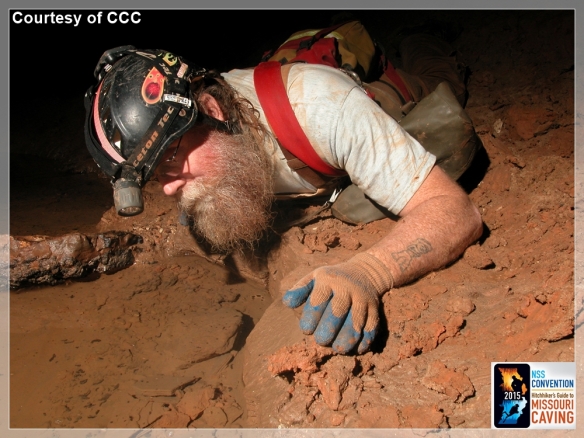 Carroll is home to a sizable maternal gray bat colony, along with solitary bats (Big Brown, Little Brown, Tri-color and more). The man-made entrance allows us to bypass their habitat at critical times when they would be disturbed by cavers coming through the natural entrance. Trips during Convention will be planned with the non-disturbance of bats in mind. We will, of course, observe WNS decontamination protocol for all cavers.

Carroll Cave is located about 25 miles from the convention site in neighboring Camden County. The cave is the second longest cave in Missouri and is a National Natural Landmark. We pledge to get as many as possible in the cave, without overburdening the highly sensitive environment. Some vertical gear will be needed- For the descent, standard rappel gear. For the ascent, we’ll climb a 120 foot ladder using a chest ascender for belay. No frog or rope walking necessary. Note: The ladder also has a steel cable running its length and we have some climbing devices for it. Some groups may use this system. 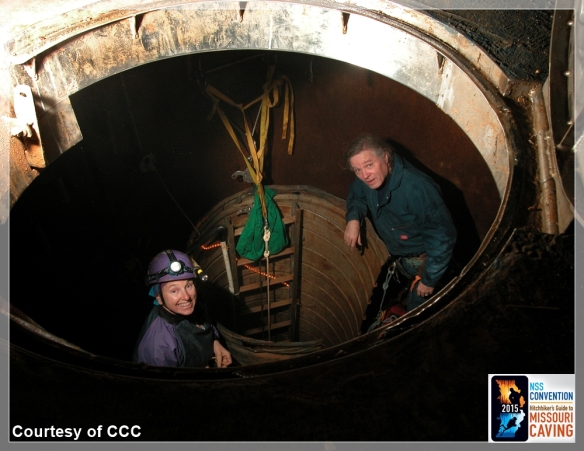 At the bottom of the ladder, climbing gear is stashed and it’s horizontal caving from then on. All groups should plan on getting wet, but with the possible exception of certain advanced trips, wet suits should not be necessary. Trips of varying levels of difficulty will be offered, all led by CCC members familiar with navigating the cave. The cave has three major trunk passages (Carroll River, Upper-Thunder and Lower Thunder River). The Back Door entrance comes into the cave near the intersection of these passages. Each day, trips will take different directions, lessening the impact on the cave. Every group should have the opportunity to visit Thunder Falls- Carroll Cave’s crown jewel. Other highlights that will be covered include Convention Hall, Conference Room, Flat Rock Falls, Carroll Passage, Angel Pool Passage, and the Rimstone Room.

If you’ve been on the fence about attending convention this year, we hope this brief intro will help bring you around. Carroll Cave trips will be announced May 1st, along with the other cave trips being offered for pre-registration during 2015 convention. Hope to see you in July!

*For more details on the creation of Carroll Cave’s “Back Door” please visit www.cavediggers.com Issue 1.

You can reach Jeff Page at pagejk@yahoo.com