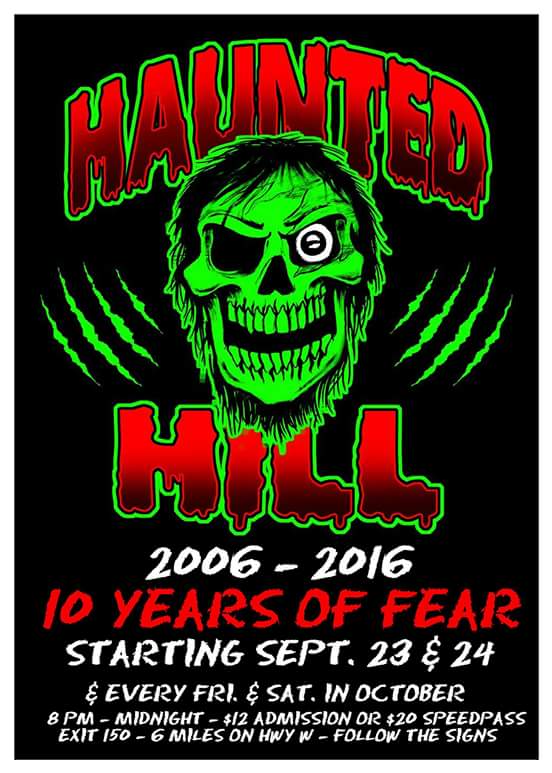 Last chance in 2016 for Haunted Hill!

An evening you won’t soon forget!

In honor of the upcoming Quilt Show hosted by Gone to Pieces Quilt Guild we present our first guest blogger article. Quilting is a strong part of our Ozarks heritage and we admire the stories that the quilts and their creators tell. We hope that you enjoy Susan’s story as much as we do!

Quilting seemed to me to be my Grandmother’s (Dona Enloe) biggest indoor hobby. She had a large vegetable garden, a yard filled with a wide variety of flowers, and a long chicken house on my grandparent’s farm, 6 miles north of Enon, MO. But in the evening, after a day that started at 5:00 am, she would sit down in her sewing chair in the living room and hand piece quilting blocks that came from the sewing box beside her chair. I never saw her idly watching television or just visit without some piece of work in her hands, until macular degeneration forced her to do otherwise. During a 1950’s visit, she told me that there was never a moment that something could not be done with your hands. In the 1990’s, she said that lack of sight, to do the things she enjoyed, was the hardest part of getting old. Her daughters confirmed that a strong work ethic was key to her families well-being and success.

During my childhood, whenever there was a vacation the whole family would go to visit my grandparents and the home town. Amusement and entertainment destinations frequented today were not an option in my family or most in that era. On more than one occasion in the 1950’s, my mother, brother and I stayed at the farm for more than a month. My mother, the oldest daughter, told me that Grandma’s preference was to work outside. I was encouraged to help with inside chores, so that Grandma could have more gardening time. As I straightened-up the house, there were a few quilting magazines and cardboard candy boxes filled with neatly cut and sorted pieces of cloth. Pattern shapes cut out of newspaper were sometimes included and if one was to be used repeatedly, a duplicate cut from fine gauge sandpaper that would hold its shape as well as the fabric for more precise cutting.

Jeane remembers visiting her great grandmother Sarah often, in Moniteau County, MO, when she was young. We children would sit on the floor and she would tell us stories about Civil War (1861 – 1865) days, but I do not remember any of those stories. She kept brown sugar in the sugar bowl, instead of white sugar like everyone else did. I learned to enjoy okra at their house.

When Etheleen was six (6) years old she first remembers hearing that Sarah and her three (3) sisters were hidden during the Civil War. “Bush Wacker’s” from both sides were a threat to property and personal safety. Quantrill’s Raiders had recently sacked Lawrence KS and killed a lot of people. Dona said our people were from the south. While the girls did not leave the attic during those years, they did make one thumbnail quilt. The quilt pattern was named after the small patchwork pieces that were formed by tracing around their thumbs. There were no stairs up to their hiding place, only a ladder and their dad would hoist the fabric up the ladder in a basket.

Pictured below is the Civil War thumbnail quilt Block Pattern: 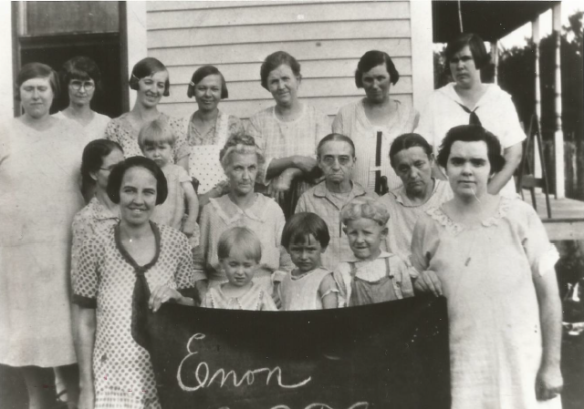 As an adult, Grandma belonged to her own neighborhood “Club” for at least 20 years, which she would mention from time to time. There were twelve members and meeting would rotate monthly between their homes. The members would quilt a top that had been assembled by the hostess, with the goal of finishing the quilting in one day. The quilt was suspended on the frame when the members arrived. Etheleen remembers, as soon as the children left for school the members would quilt hard only breaking for prayer and lunch, until the children returned. The hostess would apply the finishing binding later.

Etheleen and Jeane both say that their first memories of quilting and “The Club” started when they were 5 or 6 years old. They would be picked up and did a little quilting around the edges. Etheleen recalls being given a lap size piece to work on at about 6 years old; her mother and Aunt Lou added on to it, finishing it after Etheleen was married. This became her Wedding Ring Quilt. Quilts were embroidered with family and community signatures were popular and often given as gifts at weddings.

My aunt Jeane says she can remember playing with the smaller children under the frame, as though it were a tent. Ladder back chairs of the same height were needed to provide legs for the quilt frame. Grandma’s everyday kitchen chairs may have been passed down from her mother for this purpose. Daddy (Denver Enloe) built a box with extended nails on top, which the holes in the quilting frame went through in order to hold the frame steady.

Seldom was new fabric purchased for patchwork alone. Flour sacks were a frequent fabric source during the depression (1932 – 1946). The full sacks were stacked on pallets in Murphy’s Grocery Store in Russellville, MO, making it easier to choose your preferred fabric pattern. Sacks were mainly white with small flowers or plain, says Etheleen. The store was very small and could even be considered a booth by today’s standards. Murphy’s froze meat and since most people had a garden, the limited grocery selection consisted of non-refrigerated staples such as onions and potatoes in bends. Quilting bats, another staple, were stored on the top of shelves near the ceiling.

There was more than just scarcity of fabric in the depression. Sometimes family members would lose everything and be forced to band together. Houses were smaller then and with extra family members, space was at a premium. There was little to no entertainment and no air-conditioning in the summer. Quilting frames were sometimes kept on the ceiling and lowered with pullies. Frames could be suspended over the beds as well. One neighbor hung their frame on the ceiling of their smoke house where the quilt frame could descend and whole family share the cool of the evening. Below is a quilt with very small pieces and fine stitches that has been likened to a “gigantic family gig-saw puzzle.”

On one of our summer visits, it was my Grandmother’s turn to be “The Club” hostess. It was a memorable event. Besides having her top hand piece and all layers attached to the frame; the house had to be cleaned, lunch prepared in advance, and the dining room table set up as a buffet. The ladies arrived, some with children too young to go to school.

“The Club” meeting was a creative social event with a practical outcome anticipated. Anyone old enough to quilt was given a seat at the frame. I recall thinking I had never seen so short a needle, nor one so bent from use. About a dozen spools of thread perched on top of the suspended quilt. Everyone brought their own thimble, which flew in practiced gait. There was talk of the latest community news, while eyes were focused on the job at hand.

Pride in a job well done was present when my Grandmother took me visiting to a neighboring relative. The stated intent was to give me the opportunity to spend some time with another girl. However, the girl was not home that day and we visited with her mother. During the visit, we went to the girl’s room to look at samples of her needlework, which her mother laid out on the bed. The room was immaculate and the display impressive. My grandmother smiled as though congratulating her mother on her daughter’s accomplishment in ladylike skills.

Etheleen thinks her great grandmother Sarah and her mother Dona made at least 20 handmade quilts and uncounted tie-backs for everyday use. Her grandmother Daley H. Osick Hall (1881 – 1932) left a musical heritage, but not as many quilts. Etheleen, Jeane and their younger sister, Dorthy Enloe Messerli made about 10 quilts each in their lifetime, some being machine quilted. Better quilts were covered at the top with a protective muslin cap to prevent soil. When laundered Etheleen thinks quilts were probably washed in the wringer washing machine and hung on the clothes line to dry.

Etheleen said quilting was an inescapable living tradition absorbed while growing up in her parents’ home. The candy boxes of quilting pieces accompanied my grandmother until the end. My grandmother said quilting was more about “work ethic.” My mother said quilting was more about “being a lady.” My aunt said quilting was more about “self-sufficiency.” I say we are now at a time in this county when creative answers are not only called for but may be forced upon us out of necessity. Having inherited some of the quilts mentioned in this story, there is a sense of integrative power in sleeping beneath scraps of clothing worn by brave hard working people who built strong families in a wilderness void of convenience. In the 1960’s the European Bauhaus Art movement coined the phrase, “form follows function,” which would certainly apply to quilting, which combines creative skill, practical use and history. 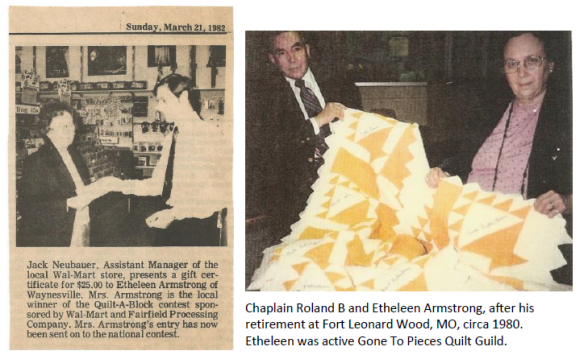 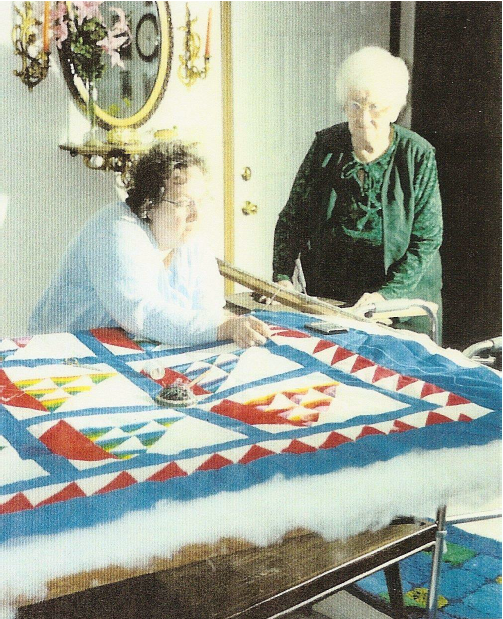 Etheleen and her mother Donna Hall Enloe who came to live in Waynesville, MO., circa 1992 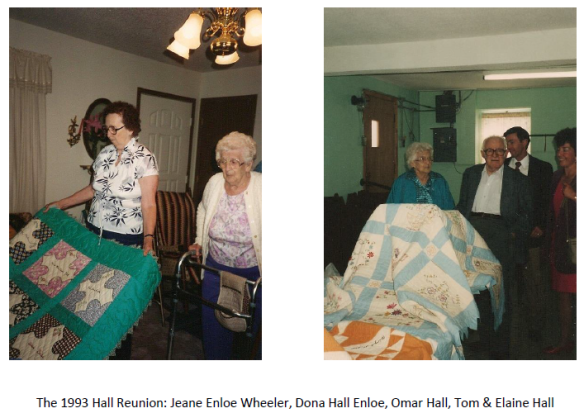 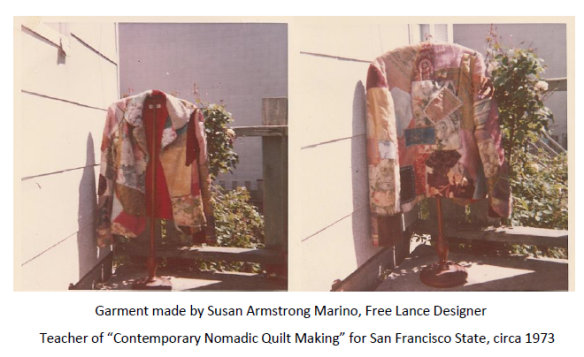 Susan Armstrong Marino, the daughter of a World War II Veteran, first became familiar with Fort Leonard Wood in the 1950’s when the roads were still dirt. The family would travel through the military base in their Chevy sedan. Susan’s family began calling Waynesville “home” in the 1960’s. After military retirement her father was an adjunct professor at Drury University for 24 years and her mother was secretary to Laquey School Superintendent. They passed away in 2008 and 2011, respectively.

Susan’s parents encouraged art and their three children all entered the work force with an art degree. Susan watched her mother quilt as a young child and when the family would visit grandparents quilting was a popular topic of discussion among the ladies. Susan applied that absorbed knowledge, and skill, to a Bachelor of Fine Arts degree. She taught art periodically for 20 years and moved back to Missouri in the 1990’s. In 2001 she achieved her Licensed Professional Counselor status and has since counseled as a Tricare provider, local agency, hospital primary therapist, and in private practice. She is also interested in history and writing and is a member of Gone to Pieces Quilt Guild.

Gone to Pieces Quilt Guild Quilt Show will be held 10:00 a.m. until 4:00 p.m., November 19, 2016 at the Saint Robert Community Center in Saint Robert, Missouri. For things to see and do in the St. Robert area, including lodging and dining information, please visit http://www.PulaskiCountyUSA.com. 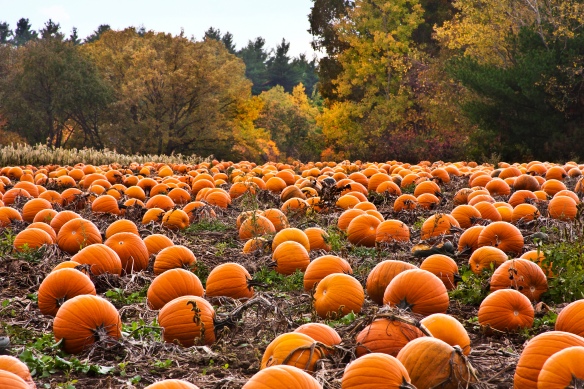 Enjoying Fall? Check out our A to Z Guide and our Annual Autumn roundup! 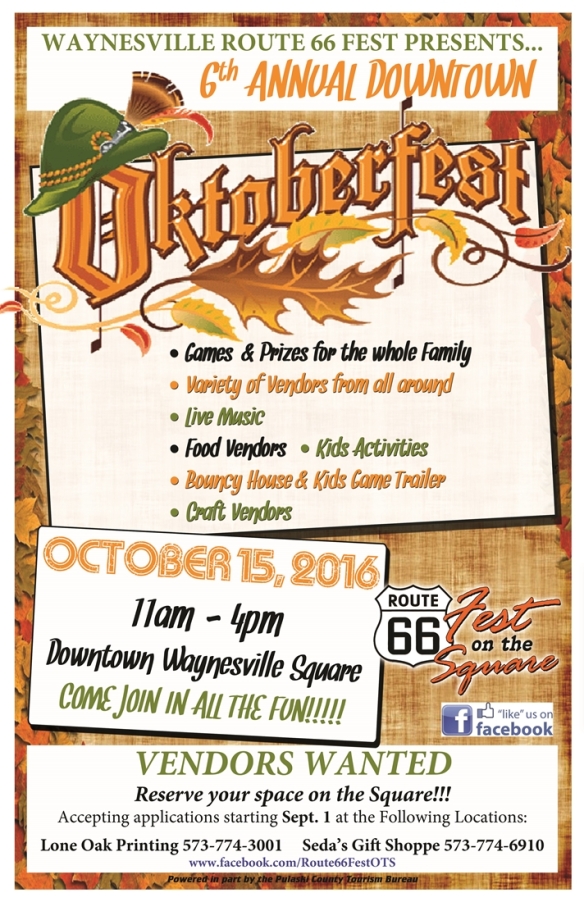 Planning for Fall? Check out our A to Z Guide and our Annual Autumn roundup! 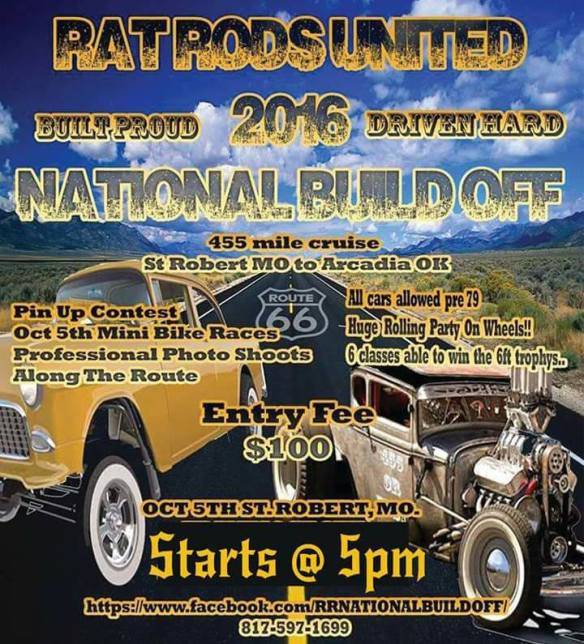 October 8- WDBA Zombie Run
What: Not your every day 5K! The Walking Dead morphs into The Running Dead as you flee for your life from the Zombie horde in this spirited 5K.
Where: Waynesville City Park
When: 4:00-6:00 p.m.
Cost: $25, pre-registration discount available
Contact: Waynesville Downtown Business Association (Cheryl Keeton)- 573.337.2494

Planning for Fall? Check out our A to Z Guide and our Annual Autumn roundup!