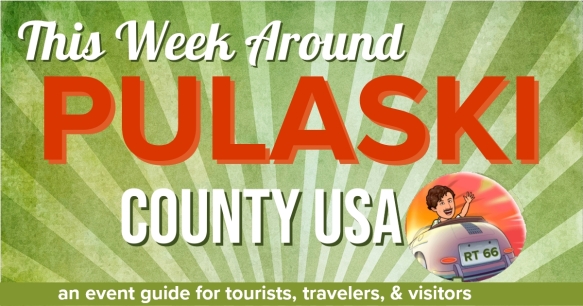 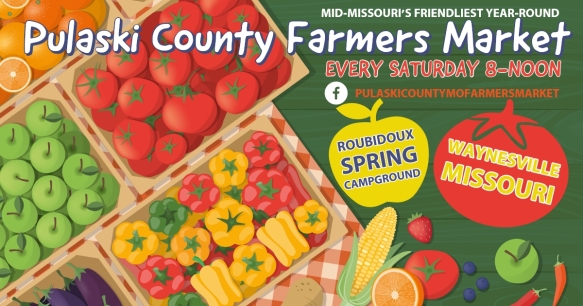 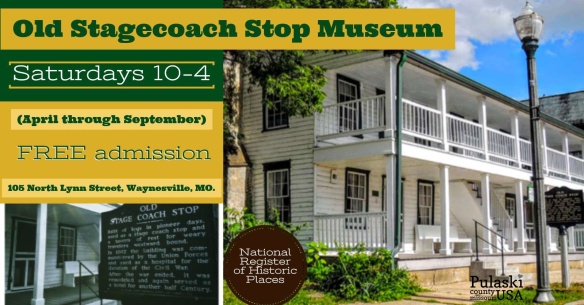 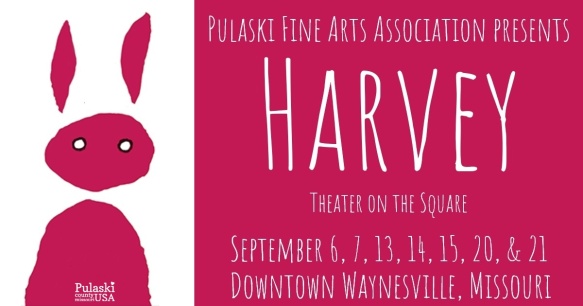 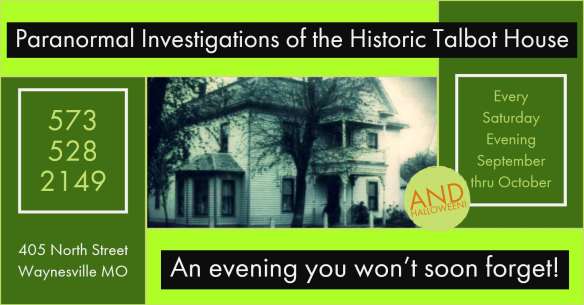 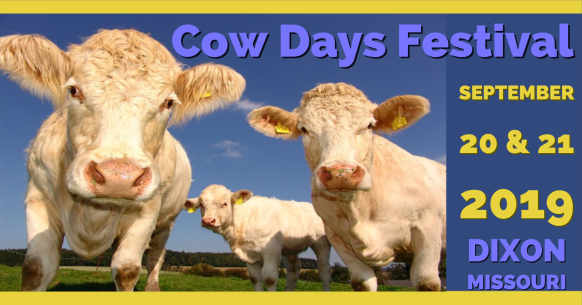 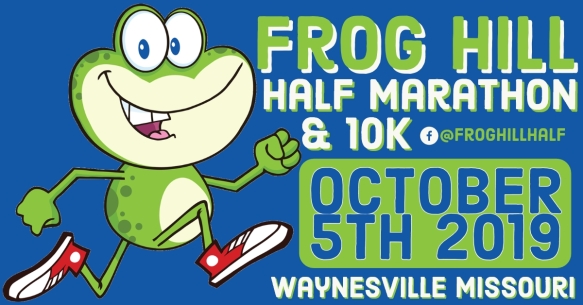 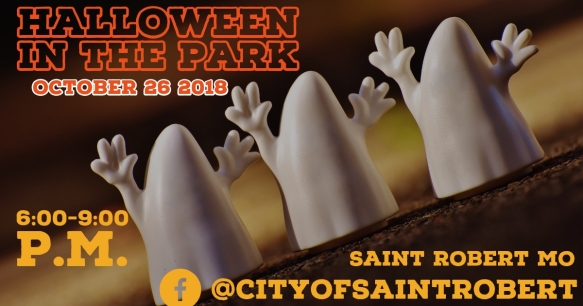 October 26- Trunk or Treat at the Park, Crocker 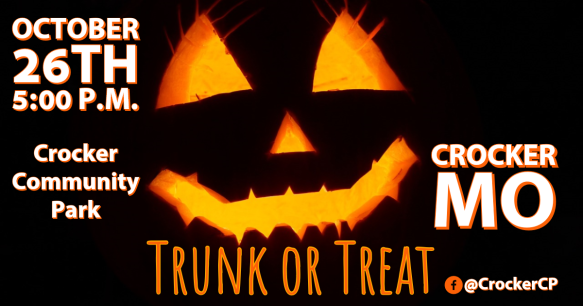 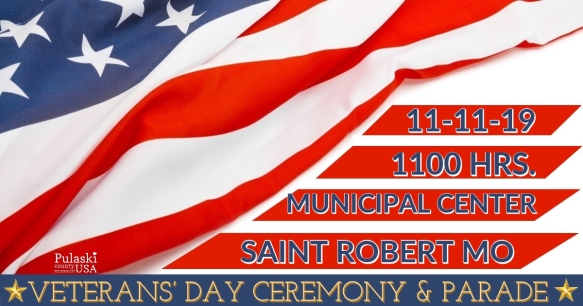 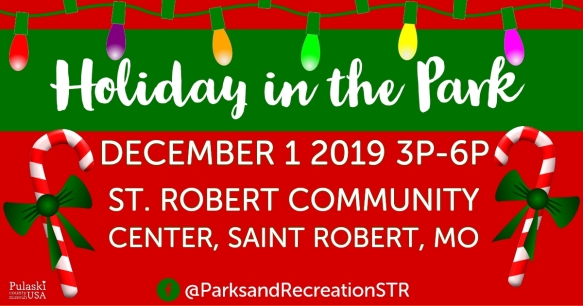 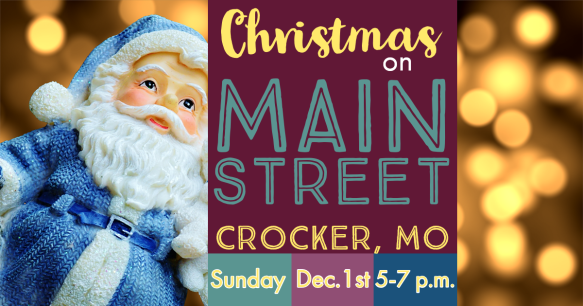 Arkansauce is a genre-hopping, four-piece string band from Fayetteville, who bends the rules and blurs the lines between bluegrass, newgrass, folk, americana, country, blues, and funk. Although influenced by Avett Brothers and Old Crow Medicine Show, the foursome possesses a hard-driving sound that is uniquely theirs.

The band’s roots go back to 2011 when founding members Ethan Bush, Zac Archuleta, and Stephen Jolly began writing together after becoming acquainted through mutual connections in the close-knit Fayetteville music scene. After a couple of years building a repertoire of original music and releasing their first album (Hambone) as a trio, they were joined by Tom Andersen on the upright bass and Adams Collins on the five-string banjo. The road-tested chops Andersen and Collins brought to the table helped to cultivate the mature, well-rounded sound needed to accommodate their sophomore release “All Day Long.” Their third album, “If I Were You,” was released April 2017.

An Arkansauce show is riddled with improvisational guitar, banjo, and mandolin leads, paired with powerful harmonies and heart-felt songwriting, all held together by deep foot-stompin’ bass grooves. There’s an undeniably intimate connection between the band and their fans that’s contagious and leaves everyone in front of, and on the stage wanting more.

Opal Agafia & The Sweet Nothings is a Roots n Roll group from Eureka Springs, Arkansas. Lead vocalist and songwriter, Opal Agafia, entered the music scene in January of 2015. Shortly after playing in local joints with various musicians, Opal Agafia & The Sweet Nothings, developed into a full roots band. Together the group puts on a high energy show while focusing on soulful lyrics and instrumental combos. Spring 2016 saw the release their first album, “One Down, Forever To Go.” In 2018, Opal Agafia release her sophomore album, “Share What You Own.”

While still a college student, Opal Agafia began a songwriting collaboration with her mother, DeAnna Smith. Their songs reflect their deep roots on the Ozark Highlands, as well as their concerns for the current conditions and future of the region. They know their history, but they do not long for it so much as they explore how it influences the present and will influence the future. Their approach is both fresh and familiar.

Drawing from many genres, Opal Agafia & The Sweet Nothings blend the best elements of soul, gospel, blues, jazz, country, swing, and traditional mountain music into a sound that captures the past and boldly looks forward to what is coming next. Their fan base is an interesting and eclectic blend of folks who seem to find something that speaks to all of them in their particular diversities. Opal Agafia & the Sweet Nothings’ sound is fearlessly haunted by those who came before them, and they seek to add their spirit to new generations of listeners who come after them.

Chucky Waggs & The Company of Raggs

Chucky Waggs is a multi-instrumentalist, singer/ songwriter based out of the hills of Eureka Springs, AR. Chucky Waggs plays a mix of guitar, banjo, harmonica, and kazoo, all while using his feet to stomp out the back beat on a thrown together drum kit. Drawing influences from early American roots music, as well as early punk and rock and roll, he’s often joined on stage by numerous accompanying musicians to add to the energy and dynamic of his original material, as well as some early American folk songs. The result ranges from intimate, often humorous, folk ballads, to all out rowdy stomp-alongs.

Chucky Waggs (Charles Adam Wagner) got his musical start playing in basement punk rock bands. Drawn in by the D.I.Y. approach to the performances, as well as the energy and simplicity behind the music, he eventually found an appreciation for early American blues, and jugband songs, as well as early country, folk and bluegrass for ,what he sees, as a similar energy and simple natured approach. 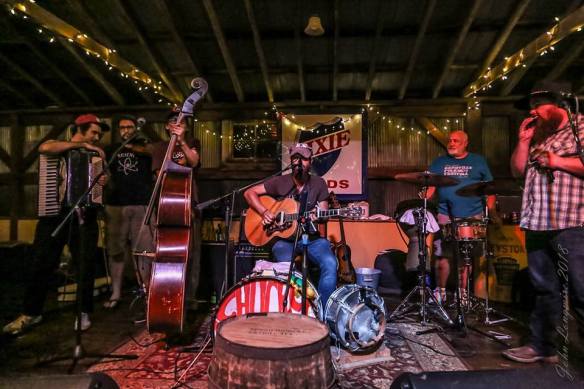 Chucky Waggs & The Company of Raggs by John Longmire via Facebook.

The Steamboat Bandits are a high-octane bluegrass band from Kansas City. The group released their first album in 2015 and currently producing their next. They are now showcasing all their original material as well as many popular bluegrass standards and build their shows on improvisation to give each show its own unique character.
The Steamboat Bandits were formed at a local bluegrass festival in 2013, where campfire jams led to organization. The band consists of guitar, mandolin, fiddle, banjo, and upright bass.

All the members share a love for music, and each add an integral part to the sound that makes The Steamboat Bandits. The band truly loves performing and is dedicated to spreading the joy of live music.

The Steamboat Bandits will be appearing at Buckhorn BlueGrass Festival near Waynesville, Missouri. Image via https://www.facebook.com/SteamboatBandits

Grassfed is a quick-picking string band. Pivoting on the foundation of bluegrass, Grassfed entwines tradition with an eclectic array of influences. Forged by songwriters and driven by instrumental conversation, the band brings a punching sound all its own.

Grassfed is among top bluegrass up and comers– releasing their debut album January 2017 and touring nationally. With a nonstop mind set, and ever growing fanbase– Grassfed shows no signs of slowing down.

Grassfed will perform at Buckhorn BlueGrass Festival near Waynesville, Missouri. Image via https://www.facebook.com/grassfedband

Hailing from the Wichita Mountains of Southwest Oklahoma, Just Strangers writes songs about the highway and worn hearts, mornings bright and early and the late night derelicts, train songs, songs about whiskey and wild women, songs about abandon and holding, songs about small town folk and homespun heart driven city rambling, some 1970’s yellowed polaroid, having nothing and wanting it all, maybe a tavern or a truck stop, something about bus stations and bowling alleys and discovering a jukebox. 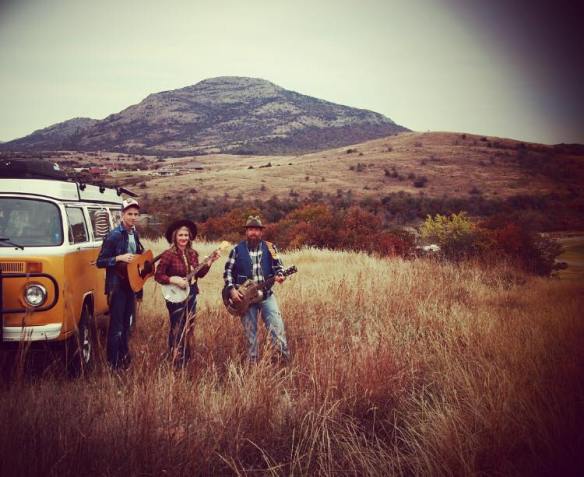 Adam Johnson has been playing live music to audiences all over Texas for the last 10 years. At 25 years old, Johnson has already independently released two albums worth of original material, played on some of the state’s most legendary stages and with some it’s most revered players. But that’s only the beginning for him.

“The Adam Johnson Band” is currently in the works on a third album and what looks to be Johnson’s most prolific to date. Pulling from his deep blues and roots influences, fans will be taken on a journey to the smoky, dank clubs that the band has cuts it teeth on for years. At the same time, the “songwriter” influences that appeared on “Part-Time Romance” (Johnson’s sophomore release) are explored further than ever before. Revealing truly original compositions, lush with soulful textures, haunting harmonies and guitar that will transport the listener back in time… And forward into the future!

When not working on their labor of love, the Adam Johnson Band can be seen in its natural environment, in front of a crowd of happy music lovers 5 to 7 nights a week. 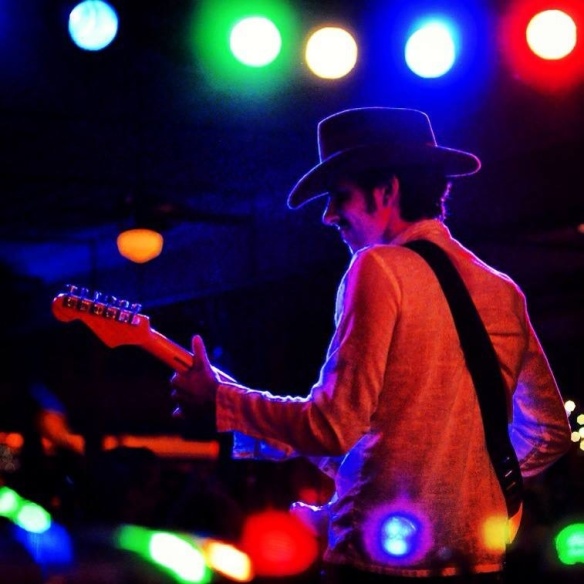 ROUBIDOUX SPRING- Reward yourself with a dip in the spring! Waynesville’s public spring has been cooling off travelers, visitors, and locals since the earliest days of westward expansion. Legend states that if you dip your toes in the spring, or even dive in, that someday you will return to Waynesville. Mayor Luge Hardman encourages you to test this theory! Located just off Historic Route 66 at Laughlin Park. (Please do not dive off the wall/fence.) 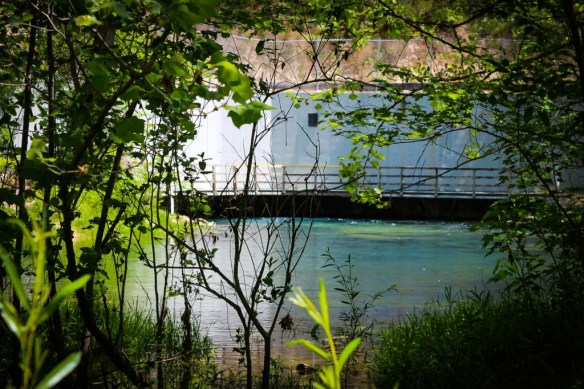 FLOAT- A trip into the heart of the Ozarks would not be complete without a canoe or kayak trip on the Gasconade or Big Piney rivers. Don’t wish to haul your kayaks to the bluegrass festival? Any of Pulaski County’s outfitters will gear you up for your float trip adventure!

TRAIL OF TEARS MEMORIAL- During the forced removal of the Cherokee from their homelands in Georgia to what is now Oklahoma two detachments stopped and camped at Roubidoux Spring in what is now Laughlin Park. The National Park Service, Trail of Tears Association, and City of Waynesville have partnered together to place interpretive signage between the spring and the river ford. The signage depicts the tragic tale- and is a somber reminder of a disturbing era of our past. 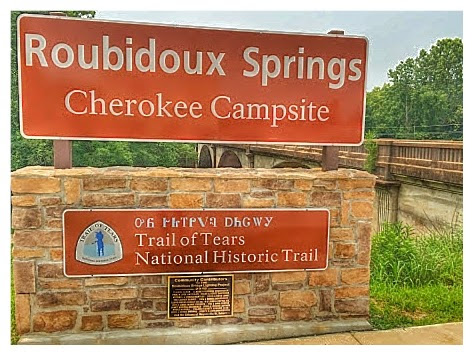 ANTIQUES & BOUTIQUES- In need of retail therapy or wanting to pick up souvenirs? Don’t miss Lost in the Woods Antiques and Talbot House Antiques, Collectables & Gifts in downtown Waynesville. Talbot House is also home to paranormal investigations for the public the first Saturday monthly and every Saturday in September & October. Just Because (on the Square) and Eclectic Originals (downtown Waynesville) both offer the perfect gift and souvenirs sure to please everyone. 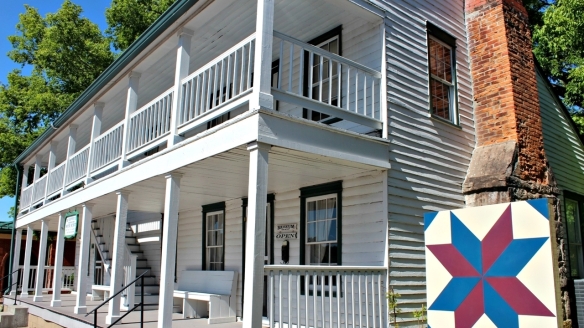 MUSEUMS ON THE SQUARE- Waynesville’s public square is home to two National Register of Historic Places landmarks that operate as museums. The Old Stagecoach Stop, on the east side of the square began as a stagecoach stop in the late 1850’s. Throughout its life it has served as a tavern, a Civil War hospital, and a hotel. The 1903 Courthouse Museum was designed by Henry H. Hohenschild who served as Missouri State Architect. The brick building housed Pulaski County’s governmental operations into the 1990’s. The upstairs courtroom, mostly in original condition, is a stunning display of skilled craftsmanship and early 20th century design and function. Both museums will be open Saturday between 10:00 a.m. and 4:00 p.m. Admission is free; however, donations are appreciated.

FROG ROCK- Also known as W.H. (Waynesville Hill) Croaker this quirky rock sculpture has been delighting Route 66 travelers since 1996. An Instagram-worthy selfie with Frog Rock is becoming a Route 66 rite of passage. (Please do not climb on W.H. Croaker.)

WAYNESVILLE WALKING TOUR- Waynesville’s FREE self-guided walking tour brochure will acquaint you with the town’s landmarks, notable locations, and sites of significance. Message your mailing address to email@pulaskicountyusa.com to order yours before Buckhorn Bluegrass Festival or pick one up at the Visitors Center (137 St. Robert Blvd.) in Saint Robert.

ROUTE 66- Waynesville is the birthplace of the byway! Missouri was the first state to enact legislation designating the former Mother Road as a historic district. The bill was signed by Governor Ashcroft in Waynesville July 10, 1990. Today the legendary highway is a bucket list road trip for adventurers around the globe. Pulaski County Tourism Bureau offers a FREE turn-by-turn guide of Pulaski’s 33 miles, including Waynesville. Message your mailing address to email@pulaskicountyusa.com to order yours before the bluegrass festival or pick one up at the Visitors Center (137 St. Robert Blvd.) in Saint Robert. While exploring the road don’t miss Devils Elbow, the “ghost” section, and Gascozark Café. 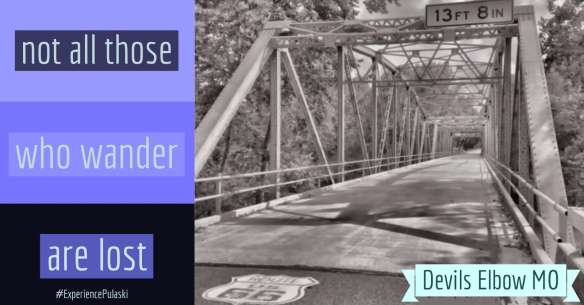 PULASKI COUNTY TOURISM BUREAU & VISITORS CENTER- Make the Visitors Center (137 St. Robert Boulevard) in Saint Robert your first stop! The air-conditioned center is jam packed with information and brochures on things to do, restaurants, lodging, & attractions throughout Pulaski County. The center will be open during Buckhorn Bluegrass Festival- Friday (8-5), Saturday (9-3), and Sunday (9-3).